Jane Seskin was the first author I had the privilege to meet at the Noepe Center for Literary Arts on Martha’s Vineyard this past October.  If I had received no other blessing from this stint with Martha’s Vineyard Writer’s Residency, her friendship would be enough.

One of those talents lies in designing creative postcards giving the punch of poetry or encouragement.  She would occasionally slip one under my door, such as: 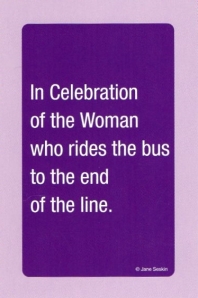 and made me feel great about an achievement.  Known as “plainjane-cards”, they say in a snapshot the things which make us feel seen/heard/appreciated.

And her poetry is lyrical.

I’m in love with the Gotham Jazzmen,

who’ve played together for decades.

Most Tuesdays at noon

I slip into the Bruno Walter Auditorium

at Lincoln Center to inhale

by the clarinet notes that pierce

my heart and confess to a crush

on half the white-haired men

in their khakis and oxford shirts.

They talk to each other on stage, yet

listen respectfully to each other’s riffs

as we applaud as one.

By Jane Seskin from the NY Times

JS:  I’ve found that my residencies poke, prod, encourage and support my desire to write. They also bring new people and ideas into my life. My first residency was at the Vermont Studio Center. There were 34 artists and 16 writers. It was a wonderful intermingling of process and craft talk. I chose to have a consultation on my poetry with a visiting poet – and it was a transformative critique. In both residencies I brought specific projects to work on. Being without the distractions of TV, newspapers, and the internet allowed me to sit with myself and focus on the written word. Each residency was an opportunity to be away from the every day pull of role and responsibility. For a period of time, my one obligation was to be a working writer.  I was, and continue to be, enormously grateful to have had this time.

RJ:  You’ve published twelve books, many on the pulse of a changing society – such as – Older Women, Younger Men. How do you know when you’ve hit on the right topic for a current project?

JS:  I write about what I wish to learn, what I want or need to understand.  Sometimes I’ve been lucky and on point, other times not.  Some of my early magazine pieces for Glamour, Cosmopolitan, and  Woman’s Day, were personal and I thought my experiences  would resonate with other women.  The Comfort Book was an answer to a felt need.  When my Mom died from a sudden heart attack, a friend asked what she could do for me and I…I had no idea!  I could not think of anything that would soften my grief.  So I set about learning what comforts me and others in stressful situations.  And I’m so glad I did!

RJ:  Do you ever worry about what people will think of your work?

JS:  When I first started writing, I did worry.  But now I don’t… so much.  Whether that comes from a lot of validation, or I’ve developed a thicker skin, or I truly don’t care because I’ve stood up and said what I thought needed saying.  And, bottom line, I try not to read bad comments. The good comments and feedback are nourishing.  They make my heart sing.  I’m terribly pleased when someone asks permission to use a poem on their wedding invitation, or for a screensaver, or they post one on their Facebook page.  I received a note from a woman that Witness To Resilience saved her sister’s life.  It doesn’t get any better than that!

RJ:  I watched you head out every morning, going to the wharf for coffee and inspiration. What is about a person/place/thing/emotion that grabs you and won’t let go until it becomes a poem?

JS:  Going out each morning was a need. To walk, to think, to have coffee and just look at the water, (where I’ve always felt at peace) notebook open, pen at hand and allow my mind to empty, to trust it to wander creatively.  Sometimes a phrase will pop in, or a sentence comes to mind and I’d just try to develop it.  Or I might have a line in my notebook that I’d already collected and suddenly having incubated it for a couple of days, I then knew what would come next.  My intention was to be open to observation and experience.  What grabs me is the need to place my life and emotions into some context.

Jane Seskin is a licensed clinical social worker and the author of twelve books. Her numerous non-fiction articles and poetry have appeared in magazines and journals. She currently maintains a private psychotherapy and consultation practice in New York City with adult clients. In addition, she is the owner of plainjane-cards.com.

RJ:  Would you tell us about your writing process and how long it normally takes to perfect your work?

JS:  I’ve been known to stop in the street and jot down an idea. It could be something I’ve just seen, or heard.  It’s all material.  Sometimes used, sometimes not.  The struggle to make a poem for me is in the rewriting, the constant editing, the putting it away in a folder and letting it rest for a few days or longer.  Then taking more looks, reading it aloud. Then asking myself: have I truly made the poem dance?  Does it say what I wanted it to say?  Does it tell a story?  Does it reveal a basic truth?  And if not, it goes back in the folder.  Sometimes I’m lucky and the poem is written pretty much in one breath, but that is for me, sheer happenstance.  (I take a similar path in writing prose articles.)  Meanwhile, I keep reading; my stuff, the work of other writers, magazine articles, a lot of nonfiction, mysteries, and of course poetry.  And perfect my work?  I think that is always, always ongoing as I struggle to make sense of the world.

RJ:  When did you first discover your desire to write?

JS:  I came late to writing.  It wasn’t a thought or a desire growing up.  It was just too esoteric.  My goal was to become a schoolteacher, which I was, happily for a number of years.  My thesis for my first Master’s Degree in early childhood education was a children’s book.  My professor suggested I show it to an agent friend of hers.  That agent liked it and me and took us on.  It never sold.  I was newly single and began writing about what it was like – to help me understand this time in my life.  And the articles and poetry sold!  Today, decades later, writing is an ingrained part of my DNA.  Not only do I want to write, I need to write.

RJ:  Can you tell us about your current project?

JS:  I am working on a poetry memoir about my aging.  I think these poems reflect my therapeutic style: authentic and down-to-earth.   Included are topics such as vulnerability, buying my last bed, attending glass-blowing school, celebrating neighborhood, red panties, friendship, sourdough bread, the sexiness of Dixieland jazz, looking at invisibility, my body, riding a bike, clutter, questioning my Doctor, shopping, personal ads, remarriage, and country weekends.  I learn to be still, advocate for myself, construct a meditation practice …  and write my own eulogy.  I would hope my experiences would be a roadmap for others.

RJ:  Your book, Witness to Resilience, was just awarded a high ranking with Writer’s Digest Self-Published Book Awards, as well as beautiful commentary on the collection. 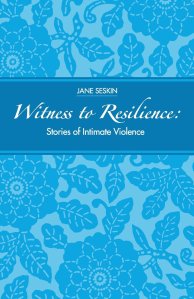 WITNESS TO RESILIENCE by Jane Seskin addresses the troubling issue of intimate violence; as she explains in her effective, well written foreword, Seskin has counseled victims for more than two decades. The collection is more than a catalog of examples of such violence and the women who experience it. Seskin examines the effects of witnessing such violence on herself as well as she relates her own fears and responses. The poems are clear, direct, and skillfully written, showing restraint in discussing a subject that could inspire melodrama. Instead, Seskin chooses details carefully and sympathetically in her spare but impactful verses. She builds rhythm in poems for effect and makes good use of refrains and repetition. Although harrowing, the collection ultimately offers hope. The volume is nicely produced, with attractive layout, good organization, and a clean, professional appearance. The reading list and information page are commendable inclusions…Seskin is to be congratulated on an impressive and invaluable book with the potential to change lives.

I know this was a difficult book to write, but so meaningful to you. What was it like to receive such a glowing review?

JS:  Oh Renee, I found the review to be thoughtful and thorough and was enormously pleased when I received it. Witness was difficult to write, but I knew I had to write it, to relive it and to leave it.  The poems were a reflection of 20 years as a clinical social worker in a specialized unit for victims of violent crimes. I worked individually and in groups with battered women. I was extraordinarily lucky to meet incredible survivors and participate in their healing.   Doing this work was a privilege. The book has been well received and I am grateful. The more people who read it, the better I feel about them creating relationships that are respectful and non-violent, in speech and in action.

I think the following poem, Intimidation (previously published in the journal Hospital Drive), describes the terror without the verbal abuse or physical assault, where you see who has the power and control in the relationship.

off three of his wife’s stuffed animals,

and left their small bodies

Okay, that’s a tough one. So I’ll close by saying: Thank you Renee, for allowing me to do this interview and enter your community.

Thank you, Jane.  I appreciate the opportunity to bring your brilliant work and the process in which it is created to me and my readers.