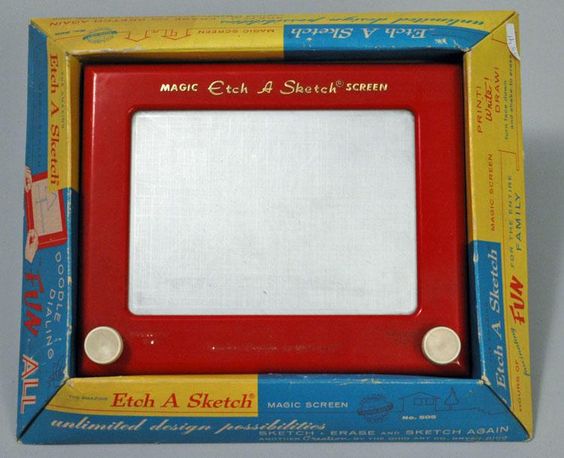 I don’t recall the year, how old I was, or even what Santa brought me that Christmas.  What I do remember is the etch-a-sketch debacle.

My sister, older by three and a half years, had received two brand new ones with pristine screens and shiny silver knobs.  When turned and twisted, those knobs made lines appear on the screen.  As if by magic I could make staircases and houses and Christmas trees.

It was all very linear.

I wanted one of hers.  She didn’t wish to share but our parents urged her (strongly) to reconsider for the short time frame in which they would be required in the kitchen to finish dinner.  Guests were due to arrive at any time.

Another oddity that year was my father assisting my mother at the stove.  (He must have issued the invitations.)

Begrudgingly my sister handed over the etch-a-sketch and I retreated to the den, away from the noise and bustle, and herein lies the crux of this story.

Precocious and curious, it wasn’t long before I wanted more than routine designs.  My mind swirled with questions.

How was this possible?

How did knob-turning make images on the screen?

With innocence, I ran to the kitchen.  My father was holding some heavy roasting pan over another pan in which my mother was furiously stirring—gravy-making I’m assuming.

“How does this work?”

My mother:  “Ask your father.”

Whoa!  (Dads, here’s a hint.  Never—ever—not even once—should you say this to a child who will do exactly that!)

I knew where my parents kept their household toolkit—you know the kind—full of hammers, sparse nails, needle-nosed pliars.

After failed attempts at disassembly, I finally could stand it no longer and smacked the thing with a hammer.

To this day, I can’t figure out why my parents were angry, even though the metallic dust covered the whole house before the event was over, the tiny magnetic ball was lost in the shuffle, and even if it hadn’t been, would have been totally useless in the busted-up etch-a-sketch.

I thought I was the only person in the world to have such an experience until I saw this on you tube.

Do you have a favorite memory of messing something up at Christmas?

Renee Johnson is the author of Herald Angels, Acquisition, and The Haunting of William Gray.  She is currently working on a Young Adult novel, while editing a suspense novel which has international flair–an homage to her love of travel and foreign food.  She lives on a farm in North Carolina with her husband, Tony Johnson, and two very spoiled German shepherds named Hansel and Gretel.

14 thoughts on “One thing to never tell a child at Christmas!”