A vacation to our cabin in Bland, Virginia is usually filled with chores. That’s the reality of having a farm in another area. This spring it has been about the cabin. The trim needed to be repainted and the surface of the decks and porches thirsted for a new protective coating – especially on the southern-facing side.

But it isn’t without its share of excitement. With my new camera in hand, I tried to capture some of its wildlife and surrounding beauty. If you are not familiar with where Bland, Virginia is, let me give you a little information about it.

It lies in the Southwestern corner of Virginia and sits in a bowl surrounded by the Jefferson National Forest. Before the late 1970’s the only way into and out of Bland was up and over steep mountain passes. When the tunnels came through, allowing Interstate 77 to cut beneath the mountains into West Virginia, the travel time between Wytheville and Bland was decreased by as much as half an hour.

But the digging unearthed some remains of a Native American tribe and the road had to be moved to preserve the site. You can visit this site at the Wolf Creek Indian Village and Museum in Bastian, Virginia which is in Bland County just one exit up from the town of Bland. We say our farm is doubly bland – being in Bland town in Bland County.

“If you talk to the animals, they will talk with you and you will know each other. If you do not talk to them, you will not know them and what you do not know, you will fear. What one fears, one destroys.” – Chief Dan George 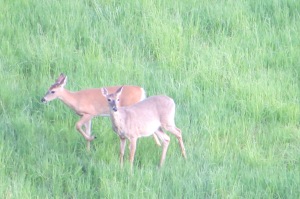 “Every animal knows more than you do.” – American Indian Proverb

If you look closely you can see the baby turkeys in the tall grass. 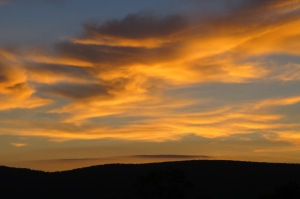 “The earth does not belong to us, we belong to the earth.” – Chief Seattle

I couldn’t resist the moon shots. When you pull this one up you can see the craters on the surface. Wow! I think I’m addicted to photography now. When will I find time to actually write again? 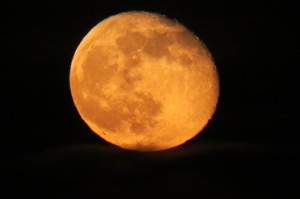 The fields are lush and there’s a fragrance to Bland that is unique to the area. A lot of the long time residents don’t smell it anymore until I point it out. It is some kind of wild herb or grass – a little like lavender. I love it, although it isn’t a constant aroma. It comes and goes on the breeze and my imagination will allow me to believe it is the natives communicating with me.

I took this shot from the back porch. 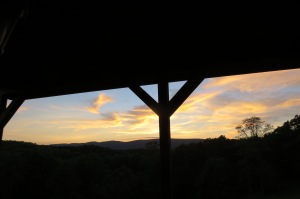 And this one from the deck. 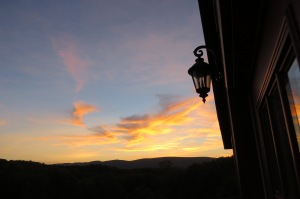 We had a wild steer using our property as its own personal feed trough once. It apparently got loose from a neighboring pasture during a storm and decided it liked freedom better than the company of others. It would hide out in the forest – which joins our property – and eat our alfalfa. I think they eventually lured it back into the fold mid-winter when it ran out of food sources.

We also have enormous squirrels – fox squirrels in silver and sometimes in red. Elk may wander through from neighboring areas that were stocked, but this is a rare sighting. We have crested grouse and the largest woodpeckers I have ever seen, lots of hawks and owls and even had a carrier pigeon once. There was a blue tube tied to its leg – the message I suppose. We decided it had been blown off course during a storm.

And because there are no stop lights or strip malls in Bland, the night sky is inky black and the star formations pop out. We often sit around and try to find those we know like the big and little dippers and the milky way.

So if this is bland, so be it. It can be deliciously wonderful to be surprised by nature. And a hail storm on the tin roof – rare music.

I also have a bit of not-so-good news and the reason my posts have gotten thin lately. We are trying to get all of the chores around the farms and house completed before mid-June. My husband is having a bit of surgery and won’t be able to do much for a few weeks. It’s not complicated – hernia surgery. But the most difficult part will likely be keeping him still. I’ll keep you updated when possible but with the extra work for me and tending to him, I’m not sure how it will all pan out. Keep fingers crossed and a good thought – will ya?

73 thoughts on “Wildlife Photos and Some History of Bland”