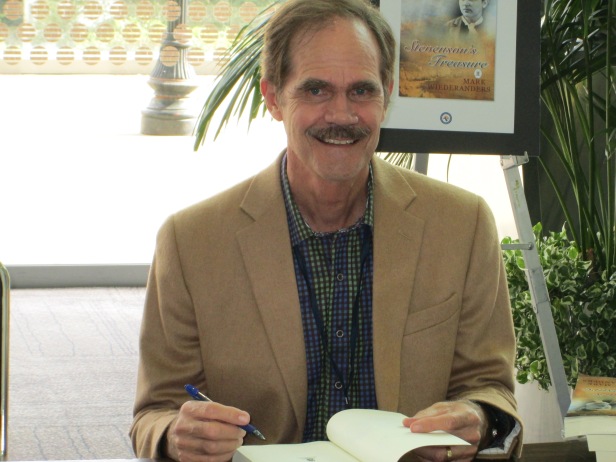 Mark Wiederanders, a Sacramento-area author with a background as a research psychologist, is another author I had the privilege to meet and work with at the Noepe Center for Literary Arts on Martha’s Vineyard during our brief stay.  He is sharp, curious, witty, and has the best sense of humor — in a dry, intellectual, and totally creative way.

In my opinion, it is his sense of curiosity leading to some of his most acclaimed works; including a screenplay – “Taming Judith” – about William Shakespeare’s family, which was a finalist in the Academy of Motion Pictures’ annual writing competition, and “STEVENSON’S TREASURE” – about Robert Louis Stevenson and his romantic, though ill-advised, quest to make Fanny Osbourne – an already married woman with children – his wife. 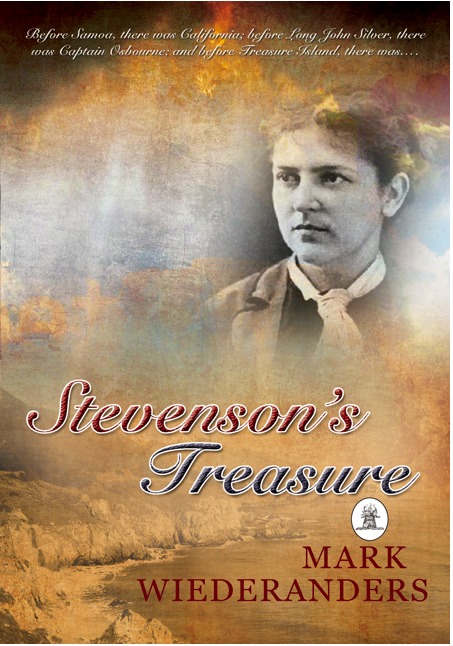 This wasn’t Mark’s first stint at Noepe.  A returning alumnus, he also has been awarded residencies at the Vermont Studio Center, and the New York Mills Cultural Center.  And he is quite entertaining.  Click here to hear him being interviewed by Capital Public Radio’s Beth Ruyak.

RJ:  This is your second time at Martha’s Vineyard Writers Residency. What is it about being out here on the island that feeds into your creativity?

MW:  It’s a beautiful setting, different from my usual surroundings in California, and hard enough to get to that I don’t feel like I can easily be called away and back into normal concerns. It’s inspiring to learn things I don’t expect to from the varied other writers who are simultaneously gathered here, including my interviewer.

RJ:  Thank you for that, Mark.  Your novel has been pegged in a few different categories but is selling best as a historical romance novel. Is that an accurate statement or do you see it as a different genre?

MW:  It is an accurate statement, but I actually saw it more as a biographical/historical fiction because of the research into the real people living within that particular time in history. I wrote a blog about it and posted it on my website if your readers are interested.

RJ:  When do you know you have stumbled upon the right character for a novel?

MW:  When they are larger than life, more expressive, more daring, more optimistic, when they feel things more deeply than ordinary people might, they jump out at me. Stevenson and Fanny both had those qualities and inspired Stevenson’s Treasure.

RJ:  Would you tell me a little about your process?

MW:  I spend lots of time on getting the storyline and characters, which can be frustrating. Sometimes I actually abandon a project I’ve spent months on but the factual meat is too thin. Then I immerse myself into the research, which involves travel, getting old letters, photographs, newspapers – original sources. Then roughing out the storyline, key scenes, and the conflict and agenda for each character within the scenes.

RJ:  Do you complete your research first and then let the creativity develop from what you’ve discovered, or do you like to toss in your elements of fiction as you are immersed in the documents for your research?

MW:  When I get to writing a chapter, I like to arrange objects, photos, letters on my desk and have my plan in mind with these visual prompts. I see it as a play, almost and let it happen organically. Then of course, rewriting.

RJ:  When did you first discover your love of writing?

MW:  At the age of 9. I liked to draw and I wanted to be a Disney cartoonist and I would draw characters and try to design comic books and at 9 entered a contest to name a father of the year. You were supposed to write about your own father, and I won the contest because of my honest portrayal. He got a Bulova Watch and I got a $25.00 savings bond, but I had to wait ten years for it to mature.

RJ:  Who is your favorite author and why?

MW:  Ernest Hemingway. He had a strange magical way with words and his writing could be unsettling and yet surprising tender at times and I think that Farewell to Arms is one of the best Historical Romances ever written.

RJ:  If you could spend one hour with anyone – living or deceased – who would it be and why?

MW:  William Shakespeare. I had some other ideas first, but I want to ask him where did all of that stuff come from? What is your process?

RJ:  Do you think that is because of the screenplay you wrote Taming Judith which was about Shakespeare’s daughter?

MW:  Yeah, I traveled to England to the village of Stratford and combed through their libraries and his old wills and the Folger Shakespeare Library in DC. There are so many original manuscripts of his works there.

RJ:  How long does it take you to get a rough outline for your novels?

MW:  A rough outline – how rough? A working outline would be about 2 months.

RJ:  How can the readers find out more about your work?

MW:  Further details about Stevenson’s Treasure including book cover and other images, historical photos, author blog, reviews, etc. are available at my website.